The MG updated me on free speech this AM and she reminded me that just because something is in writing doesn't make it so. In some books, Monkeys Fly. Here is the Wakepedia illustration of Dorothy being carried off by monkeys. The other two people in the picture are Toto and the Tin Man. 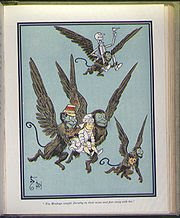 Today one of the MSM articles talks about two people that spoke out on the Gates "Stupid" meeting and have been hit hard. One is a Boston Police Officer and National Guardsman that has been suspended for using racist remarks to describe Gates and the other is an Aide to a Democratic Politician that called the POTUS, O'Bama.

Where does the system shout fairness when the POTUS can call an action "stupid" and other people can't even e-mail or facebook about it? Don't get me wrong, anyone that calls a Harvard Professor a "Jungle Bunny" is just pushing the outside limits of my thinking. On the other hand, I have all sorts of problems with not allowing speech unless it is hurtful not hateful. Where is the ACLU when that bastion of our constitution is attacked?

Chris Rock has a skit on youtube on being black and not getting your ass kicked when you are stopped by the police. While I think that no one should ever have a traffic stop or an arrest elevate to the baton beating level of Rodney King, the part about the Police having the right to fight back should be a lesson that everyone hears. My momma told me to never raise my voice to anyone with a gun. The police have batons, handcuffs, Mace (or pepper spray), Tazers and guns. That qualifies for people that I try my best to be polite to, face to face. Not that having a badge is an absolute qualification for the label, "Smart". That mostly means that when they are doing their job, let then do it and discuss with their supervisor later if they cross the line. There is an old Union directive that tells workers to do what they are told and "Grieve" the action later. Unless the action is so dangerous as to cause bodily harm, that ain't bad advice.

But, back to the Free Speech side of this discussion. If being a little impolite is a problem, my pal Two Dogs and I are headed for trouble. Perhaps the MG will guide me on this subject. Perhaps hell, she asked me if I had any idea how many posts I have done in the last 24 hours... Yes I do and I don't care. I write this crap and it is up to the readers to decide if the want to read it. I know some of you are creeped out by snakes so if you are, skip the next post down this list.