I Yam what I Yam

MEN ARE BINARY - EITHER THEY ARE TURNED ON OR NOT 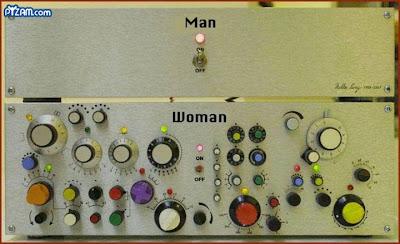 I stole this from Becca cause it is so true.
I saw a part of the Oprah interview with George W. Bush (POTUS 43). I was struck by how he described how drinking snuck up on him and the effect it had on him. I am not an alcoholic, I am just a sober drunk. I gave up drinking years ago and and am much the better man for doing so. I too don't really remember when I crossed the threshold from just drinking to drinking "Too Much". It is possible that from the first drink, I was destined to drink too much. It was early and often that I needed a drink. I did not just like beer and Whisky, I needed it to help me deal with the stress at the end of the day. I don't think a day goes by that I don't want to take a drink. I stay sober for today and have stacked up a bunch of days together. OK, I borrowed this saying from AA. It is the powerless part of AA that I object to. Either I am the most powerful person in my life or I would give up. I let Mom do the praying for me.

Hell Yes, I was avoiding the solutions and adding problems to my life. I don't blame the Military for being the cause of my drinking, only for putting me in a place where it not only was allowed, it was required. My first assignment at Fort Irwin, CA in 1967 was in the place where the end of the world meets the lowest place on earth. The north end of Fort Irwin is the south end of Death Valley. I'm not saying that it is the place that the good lord would give the earth and enema, but you can see the insertion point from main post. At least twice a week we would have an Officer's call at the Officer's club and they played liar's dice for pitchers of beer. I was a terrible liar. The good news was that the beer was cheap and plentiful.

I continued drinking until I attended an Alcohol Information Workshop. It was sponsored by the Guard so in a way the Military was responsible for showing me the problem. Barb and I filled out a questionnaire about drinking if you answered three questions yes, you were in the opinion of the author, headed for problems. I answered 7 out of 10 yes and when I looked at Barb's card, she had 10 out of 10 marked yes. She said she had filled it our for me and generally I was to drunk to notice the last three answers she marked yes. I went out with a good friend for a happy hour on a Friday afternoon and about midnight, he called me from Jail and wanted me to come bail him out. On the way home, we discussed how two old worn out Military guys could have gone over the edge. We both pledged to stop drinking and I've been sober since that day.

Somewhere during that same time I gave up smoking. I have dreams about smoking my pipe now and then. I think it was much harder to stop smoking than drinking. I really had to taper off the smoking and I was truly addicted to nicotine. Oh well, that's another story for somewhere down the road. I am just glad that my path did not cross marijuana or cocaine cause from what I hear I would have been an easy target for their addictive properties. Well, I really think not because I'm the cheapest bastard around and would have never paid big bucks for a easy buzz.