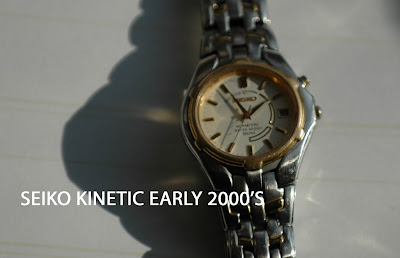 OK, I'll admit I am a watch junkie. In my dresser there are a bunch of working and non working watches that I just can't seem to give up. This morning I saw a watch ad from a jewelry store and found that I covet another watch. Dang, I hate it when that happens. 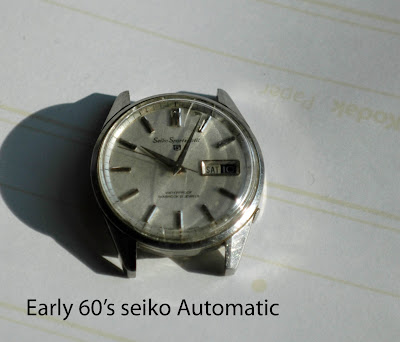 Like a lot of you, I went from the first manual watch that you wound daily without any calendar all the way to the Kinetic with a calendar. My brand preference is Seiko (Sayko or S i ko) and have no interest in a $3,000 Oyster perpetual Rolex. At least with the Kinetic, I have to move to keep it wound. The newest watch of my fantasies is the solar. You can lie on the beach (Hell, I can lie anywhere but tales told on the beach are the best) and keep the correct time. You don't have to even move. Now, when they manage to put the perpetual calendar on that watch I might break down and buy one. 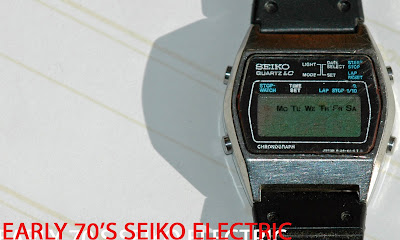 My favorite watch story is about the first Timex Tin Man I bought. I was visiting my father who was in the VA Hospital here in Topeka. He saw my watch and said, "I have always wanted one of those." What's a guy supposed to do except give it to Dad. As he looked it over, he asked me if I could take the band off his old watch and put it on the Tin Man. Yes I can, and I did. A couple of days later, he looked at his watch and announced, "This watch tells me three things more than I need to know." I'll bet there are functions he didn't know how to use. When Dad died and we were at the mortuary for the family visiting, the subject of what was dad going to wear in the casket came up. By that time I was pretty sure that the new replacement watch I had was going to last a long time and that $29.95 Timex might as well be buried with Dad. I told Mom the watch story and she said, "OH yes, your dad wanted you to have something that is at the house." When I took her home, she gave me Dad's gold watch he got from Beech Aircraft for 25 years service. It is a Hamilton that spells out Beech Craft on the dial and has a little red airplane on the second hand. I don't wear it much except for special dress occasions. I got the best of that trade and will always wonder what was going on in Dad's mind. 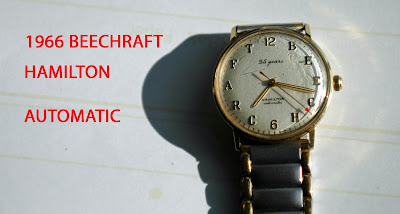 FREEBEE WATCH THAT HAD A COUNT DOWN FUNCTION 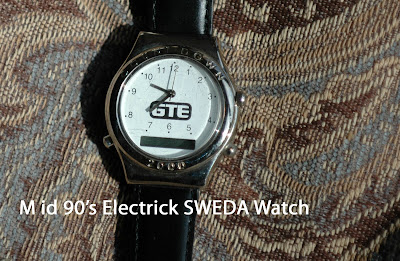 In Vietnam, I was visiting our new headquarters in Dak To. I had just purchased a Seiko watch and was wearing it pretty much daily. One of the guys pointed out that it was probably a copy and a cheap one at that. My "Waterproof" watch was turning my wrist green from cheap brass and the face was foggy from a combination of Insect repellent on the outside and moisture on the inside. The crowning blow came when I slipped and fell while building a sandbag wall. I hit my arm on a metal stake and wiped the face, crystal and hands right off that watch. I threw it away. Somehow in the next week or so, I managed to get to the PX in Pleiku and purchased a real Seiko that worked fine. That watch lasted three or four years without fail. I was water skiing in Arkansas and Barb saw that I had my watch on. She asked my Dad to drive the boat close enough so she could take it and they tried. Somewhere in that maneuver, I tossed the watch to her and it splashed to the bottom of Beaver Lake. Somewhere out there is a watch that is probably still working.

Oh hell, by my new Seiko, I can see that I have managed to waste another hour or so writing about a subject no one probably cares about. Oh well, TIME TO GO.