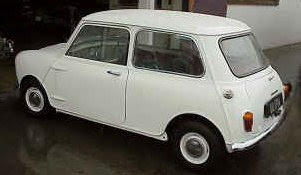 Long before the Mini Cooper was this fast well known car, both Morris and Austin made a "mini" and in 1962-65 we had one. It was a go-cart and was ever so much fun to drive. The second best thing was the fact that if the battery was dead, you could push it yourself and jump in. slam it in gear and drive off. The battery was in the trunk and seemed like dead more often than good.

My dad was one of those guys that loved a good challenge and the Mini-Minor or the Morris 850 was one. Ours had been in a head on crash and according to the story I heard later on, the driver had been killed. Dad bought it cheap and spent quite a bit of time getting it running again. He used a torch to heat the fenders and straighten them out. I'll bet there was a couple of pounds of lead on the ground from earlier bodywork. The car started out white and ended a two tone primer and white.

It was a great little around town car and back when gas was cheap got at least 30 MPG in town and almost 45 on the road. That area is one that I don't recommend. We drove it to Arkansas one time and it was a little "feel every bump in the road" car. At best, the upholstery was a single layer of foam rubber covered with a slick plastic. Your butt bottomed out except in the front seat. The tires were 8.50X10 and while they stuck on the road in curves were rough as hell. Remember riding in a go cart? You were thrilled by the ability to slide around the corner and go fast? That feeling left as your butt got numb and the lack of AC caused you to sweat on the plastic seat. Back then, AC was an add on and almost none of the cars came with one standard. I'll promise you that there was no where to jamb a compressor or an under the dash unit in the mini.

Another area that was problematic was repair parts. I'm sure there were hundreds in every salvage in England but not one anywhere in the Heartland. There was an MG dealership in Wichita and he charged two prices for everything and it always took a couple of weeks to get it shipped from wherever it was they came from. I think a lot of the parts had to come from England and if you wanted it fast, add a third more to the price. Ship it by boat and add a month. Crap, but I loved that little car.

Today is going to be a fun day for us. Barbara is at a Master Gardner meeting this morning and tonight we'll get to see the KU JayHawks play their first game of the year. They open their doors to Washburn University from Topeka and it is a good thing for all. Without a doubt it will be a sell out and was part of a 10 game home ticket package. In a couple of months we will also get to see K-State at KU. On our way out of town, we'll probably stop and vote.

Better go see if there is any trouble I need to get into.