Just So You Will Know! 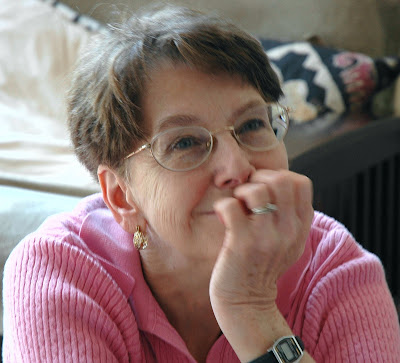 Yesterday, my better half put out an e-mail to the mail groups on my computer. Then, she didn't sign it. For those so blessed to not be on the list here is the message with my comments in red:

Can you tell which of the following is made up:

1. Barb and MUD had a disagreement about whether the local government should have denied a zoning permit to a new development when the residents of the area objected. (The content of the discussion was should the business have the right to sue the commission if they didn't get the answer the wanted. The right to redress grievances is not limited to business, even if Barb thinks it is a dirty word)

2. We had a widespread frost in Kansas in May so home-grown tomatoes for Fourth of July are just a pipe dream. (True)

4. Barb has accepted a new position at Michaels as the Events Coordinator even though Michaels stopped having events so there will be nothing for her to coordinate. (It is the Wilton's cake decorating classes she will be managing as well as demonstrations to get people to buy all sorts of crafty crap)

5. MUD will need to start mowing grass soon and will be on his mower 24/7 for the month of May so he won't be able to update his blog or make outrageous comments on others' blogs.(Oh if it could be true that I will lose my impetuous to make comments or write this stuff)

6. Barb's e-mail is down so now is the best time to relay secrets to MUD. However, be advised that MUD is unable to keep a secret so the secret will quickly be posted on his blog assuming #5 is made up.(Whatever I would write would at least be witty if not pretty)

7. Barb once won a family tall tale contest refuting the belief that the best liar in the family is MUD. (I prefer to the appellation of, "teller of tall tales" and yes, this was a Petty family gathering)

8. MUD knew how to spell liar but not how to spell lair. Fortunately we weren't making up stuff about dragons. (See what dyslexia gets you? Thank god for spell checker. If there are spelling errors in my material, I blame it squarely on the shoulders of Microsoft's spell checker shoulders)

MUD and the newly crowned queen of BS, Bobwa