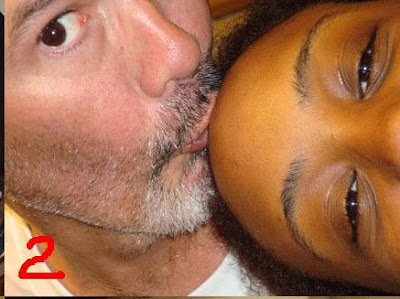 This is a picture allegedly of Two dogs from his blog. I can't be sure because we have never met except on line. The forehead he is kissing is Bean. Someday I will be passin' thru the Sip (Mississippi) and stop in for a cold ice tea. I'll bet Bean puts sugar in her tea but I'll drink it any way. 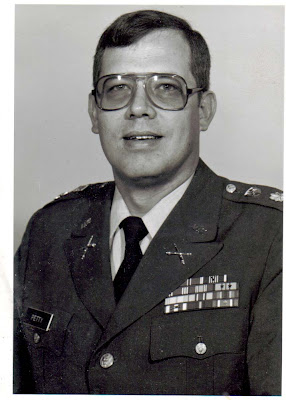 This is a picture of me in my Army suit. It is probably 20 years old but it as good as it gets. Everything since then just makes me look old. I refuse to be old!

One of the best blogs I read is written by "Two Dogs" at: http://liberalsmash.blogspot.com/. I would encourage you all to consider a write in for Two Dogs for President and MUD as the VP. I'm sure that one of the moderating influences on TD is his significant other, companion, girl friend and recent deployee/ returnee to/from a War Zone, LT Bean. I doubt that she has much more of an influence on him than Bobwa has on me but it is worth a try.

I can't speak for his platform, but I promise to never wear platform shoes or claim to have any soul other than on the bottom of my shoes. I stand for ensuring that each child out there understands that success is fueled by an education, hard work and going to work each day. I will proposed a balanced budget that says, "Income must be equal or greater than Outgo". I absolutely will not talk to anyone that makes a point of race, religion, gender or sex, well,, perhaps I will talk about sex off the record and in private.

I can't speak for TD, but I can say that I am one of the most boring guys you will ever hope to meet. I don't smoke, drink or play around with wild women. I will shovel Bobwa's dirt, but with a shovel. I will pay my taxes, fix my cars and do my best to be as nice as I can be. I will try to cook as many meals as I can if I can find someone that loves to clean the kitchen after a great meal. My cabinet will definitely be in the kitchen. I refuse to dance Disco but have tried that Cajun two step and might dance at the inaugural ball if there is a Zydeco band.

So, if you are refusing to vote in the Presidential election this fall, get out and write in Two Dogs for President and MUD for VP. Now, to be honest, I haven't discussed this with anyone but me and I agree it is a good party.