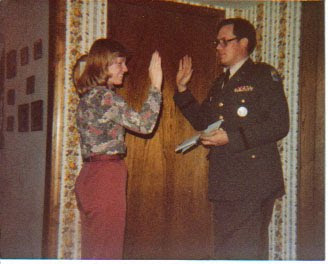 There are many women I have met in the military that I think highly of. Beth layden, SGM Jana Harrison and Chris Belin were always a tribute to their job and our uniform. I am sending this out in response to Old retired Petty Officer's discussion on women in the Navy. http://oldretiredpettyofficer.blogspot.com/

This was written in the late 90's and is 10 years old. In my study of the Military, I found an interesting parallel between women in Wartime and Combat Jobs and Blacks in the same roles. From the Civil War to the 1950’s, Blacks were considered inferior for combat duty unless white Officers led them. For the most part Active Military units relegated Blacks to Combat Support Roles until the integration of the Military after Korea. The exceptions were National Guard units and volunteer experiments tried by the few progressive Military Leaders that were willing to take a chance. There were a few Black Brigades in the Civil War and there is a Military History Poster about the World War I, “Hell Fighters From Harlem”. From WWII, there was the “Tuskegee Airmen” and the 555th Combat Regiment an all black Airborne Regiment experiment. Until full integration was reached in the 50’s and until the young Black officers and Non Commissioned Officers moved up into leadership positions during the Vietnam era there were few black Generals and Sergeant Majors. From the 1960’s on, the Military led the way to full integration of minorities in all facets of the Male dominated services.

I feel that I should move on to the role and rights of women in Combat Positions. Early in the history of the Military, women were relegated to positions such as clerks, drivers and Nurses. The Field was an all male bastion and women were not allowed during combat on Ships, in Air Crews or in units where women could be exposed to direct combat with the enemy. As one should never say never or always, there might have been a few exception but for the most part women did not move into anything nearing an equal position with men until the modern era.

In the 1980’s, the Military tried to develop a study that would scientifically define women’s and their roles in the Military. The study framed the discussion called a Direct Combat Probability Code (DCPC). The DCPC looked at the jobs and the opportunity and probability of meeting with the enemy in combat. The study, for the most part confirmed the Male leadership’s feelings that women should not be allowed in Combat roles. There were a few exceptions in the study that allowed some women in Combat MOS’s but limited women serving in those roles for positions located in higher headquarters.

In the Army of my youth (1966–80) I served with few women because of my assignment to Field Artillery units at battery and Battalion level. The “good old boys” took care of each other and women were talked about but not seen. In our field units men could strip off their clothes and bathe in a helmet without the worry that there were women nearby. In 1980, I was assigned to the National Guard State Headquarters in Topeka, Kansas. There, women made up a significant part of the membership of the unit and my earlier preconceptions of the Military had to change dramatically. The first change was potty halts in Military Convoys. We had to plan on using the rest areas for the vehicles with women. The men just urinated between the rear dual wheels on the trucks.

It is interesting that about the time of my transformation, the Military was undergoing the same change. Women were showing up more and more in our units authorization (Table of Organization and Equipment ,TO&E). With the move towards an all-volunteer force our recruiters were working hard to recruit all sexes into the Military.
One of the biggest shocks was having women in positions that caused them to be in the Field with the men. This created the need for female facilities and separate tents for different sexes. It definitely changed the level of swearing and raised the decorum in most units. There was one girl called "Motor Pool Mary" that could out swear the guys but that's not the point here.

In conventional wars, the front lines are somewhat well defined and the enemy weapons systems were fairly predictable. You can somewhat limit the location of women and therefore limit the number of females that die. Society has for the longest time been willing to send their young men to die but not the women. Men do the fighting; women raise children and stay home. That changed in society and that change was reflected in the military. The equal rights to live free and have equal pay has been tested by the equal right to die in combat.

In unconventional wars, the front lines blur and the fighters are harder to tell from the non-combatants. A primary description of the difference can be found in the ambush of a Maintenance unit that led to the Jessica Lynch story, “I am a Soldier Too”. The two Kansas National Guardsmen killed in Iraq were Field Artillerymen and because there was no need for Artillery, they were assigned duties more like Military Policemen or Infantrymen. They were killed protecting a convoy from attack. The unconventional roadside explosives don’t differentiate between women and men.

Today there is still somewhat a protective part of the Military that shields women from the role of warrior but that distinction is becoming less as society’s attitudes soften. I do not think there will ever be a free assignment of women in combat until our attitudes continue their transformation and women are seen as equals in all facets of life. We are on that road now and it is only a matter of time until there will be only Soldiers, Sailors, Airmen and Marines not men and women in those services.

'Cides I look silly as hell in one of those Berets.