Another fine day in the Heartland! 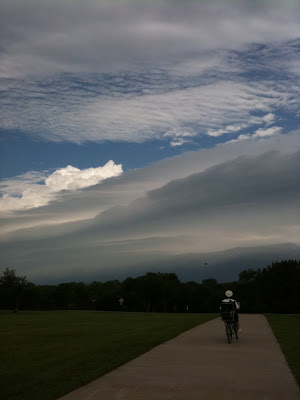 It is a calm, and sunny 74 degrees here at 8:30 in the morning. This weather remind me of the mornings in Minnesota except for the fact I am not covered with bug bites. There are a lot of people that aren't morning people that fight getting out of bed, I ain't one of them. I attribute most of that to the fact that I can fall asleep almost at the drop of a nap. 15 to 20 minutes will recharge my batteries like nothing else.

I really feel bad for our Black Lab. Since the death of Baby, he is alone out there in the pen and has taken every chance to escape given to him. He doesn't run off he just escapes. I have an electrified cattle pen around him and his thick fur protects him unless he hit his nose on the fence. he'll stay around for a couple of days after that but then I'll find him out on the patio making more noise than a freight train. His demise will come early if he ever snaps at Barb again. She stopped the car to keep from hitting him the other day and she opened her car door. He thought she wanted him in the car and he climbed in. Then when she tried to push him out the far door, he snapped at her. Not the behavior Barb will condone in big dogs. One more snap like that and he will take a trip to the Dog Pound. I think I'm going to work outside a lot today so I think I'll let him out and play fetch with a stick.

Oh well, things here at Rabbit Run are good. I have seen a lot of rabbits this past week and we are having great weather.