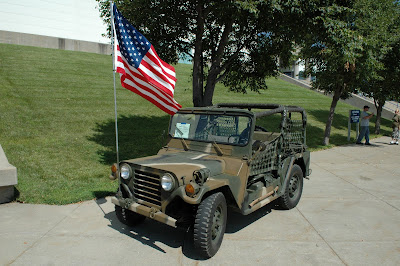 I think everyone should have a day like yesterday. For me it started out early and I had a fresh pot of coffee and the paper by about 6 AM. I got to read on a good book for a couple of hours and then I went to the Expocentre to see the Military Vehicle Display. All sorts of fun things to see there including a replica of the Swamp tent from M.A.S.H. . The fellow manning the display said that a brush fire swept through the tents in the hills of California and no one bothered to save the interior set used at the studio. What we saw was a replica and a pretty darned good one.

I was thrilled to see that a lot of the Military Vehicle Collectors were younger than I am. That means the hobby might have a chance to survive into the future. A lot of the collectors have figured out ways to help finance what is an expensive hobby. One person had a jeep and gear that you could have your picture taken in/with and he printed out a copy there on the spot. I didn't see what he charged but there were a lot of grandparents with their little one's documenting the day. Another guy had a dog house on the back of a vehicle and was making Dog Tags at $5.00 a pop. Long line there. One fellow had remote controlled tanks you could rent for a few minutes for a small fee. All ways to make old military vehicles live again.

The most amazing thing I saw was the grey Pontiac Ambulance in the middle of the auditorium. I thought it looked like the one that met Air Force One when they brought JFK's body back from Texas. I went to the front of the ambulance and sure enough there was a picture of that happening. I am amazed that that ambulance hasn't been snapped up by some collector and put on display in some Presidential Library or some Military Museum. It was a piece of history that a lot of us remember.

In the evening we went to KC to eat some of the BBQ cooked on/in the Craig's new smoker. It is a Webber so now I have grill envy. They did a mighty good job of pulled pork and ribs. Anyone that went home hungry did so because they wanted to. I took Dan a basket of Hickory chunks for future jobs.

We also played a game called Baggo or corn bags that you toss on a target that is a lot like horse shoes played with bean bags. Our host, Dan and I beat two pretty good teams and had a lot of fun. I may have to build a set so we can play here. a four by 8 sheet of plywood will make four targets and a little cloth and a couple of cups of popcorn will make a bag. It takes 8 bags.

Oh well, better get on with the day. have a great Sunday out there.