TO THE STARS THROUGH DIFFICULTY!
DID THE EARLY KANSANS HAVE THE
KNOWLEDGE TO KNOW THAT LIFE IS TOUGH? 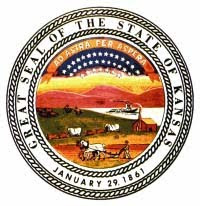 A few weeks ago, I had coffee with a bunch of the retired National Guard guys I had served with. The discussion crossed many subjects and as is typical it was loud (Most of us are old and partially deaf from guns of all kinds) and spirited. I pitched the old soft ball about taxes and you could have heard a pin fall. I couldn't raise even a discussion on the issue. To a man, they were all pretty happy to have what they have and willing to pay what is needed to be paid. What does that say about the retirees that served in uniform and now are drawing retired pay plus whatever they earned elsewhere? I have my taxes about ready to go in and in spite of having to pay a bunch, I feel that because I have enough money to pay my taxes, I should shut my pie hole and be glad for good things. I am pretty sure that a lot of people don't listen to old guys complain anyway.


I think this is really how the majority of people out there feel. I think the Government would be well served to find a way to withhold what they need and eliminate the April 15 filing. There must be something about attitude or how do you explain the number of people that know this is a Republic and we get the kind of Government we elect and well over half the people don't vote. Yes, I know that is a run on sentence but I needed to get a lot of thought in there. Once there is a chicken in every pot and a car in every garage, the DOGAS of most people is low. DOGAS is Degree of Give a Shit for those of you that have not served where morale is a factor. DOGAS is Military speak for a measurement of attitude.


During the winter months, if I wake up with a sore throat or a stuffy head, it is the precursor to a cold. This time of year, it is allergies to whatever is in bloom. Right now, the green is just starting and there aren't many flowers or weeds so it is probably the Cedar trees that are the culprit. Those, we have plenty of. One day when it was sunny and little wind, I saw smoke coming out of a cedar tree. It was pollen and the tree was a prolific producer.


Speaking of P's. One problem we have with a young first time President is that he doesn't have the background to know he doesn't have the depth of knowledge to find solutions to all the problems that bite him in the butt. I doubt that Barack also has the experience to know what are the contingencies and how to develop a comprehensive plan to deal with changes. One of the jobs of a staff is to help the boss have a plan and some contingency plans to deal with changes. Failure to understand and to develop contingency plans is a key in the PPPPP mode. Prior Planning Prevents Piss Poor Performance. We elected this guy on the motto - Yes We Can! the only problem is no one asked him what that really meant? There is a squirrel out there that every morning attacks the feeder with the attitude that Yes, I Can. Does he ever get any seeds out of the thing. Not lately and he keeps trying. Well, I guess one or two times out of a hundred as he jumps off, a seed or two spills out but not often.


So, to close this little ditty, I am going to tell you that attitude is all matter. If you don't mind, it don't matter,