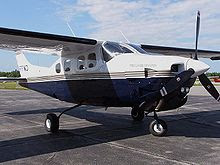 THE PILOT HAD TO USE A FLASHLIGHT TO SEE THIS

The facts in this story are as I remember them and may be slightly exaggerated but mostly true.

Topeka, KS is the only State Capitol that is not served by Jet service the last time I looked. In fact, right now I am not sure that we have any regularly scheduled airline service because I like the rest of the world would rather drive to Kansas City International than fly out of here and then land in Kansas City to transfer to another airline. This story took place at least 15 years ago and I would hope that things have improved in the commuter airline market.

I was returning home from a Business trip, probably to Washington, D.C. and as usual I was pretty tired of being on the road. I had elected to fly out of Forbes Field and return there where I had my car parked. I had to walk down to the end of Terminal A and then to the ticket counter for Capitol Scareways (The name has been changed to protect the guilty) There was nice young man checking people in for the trip to Topeka. He appeared to be almost legal drinking age and mostly sober. He would check the tickets, tear off the appropriate part and load the bags on a rolling cart. About 15 minutes prior to takeoff time, he pushed the cart over to an elevator and I watched him load the bags on the plane. He came back up and announced the flight and the five or six weary passengers lined up by the stairs down to the plane. It was one of those Cessna's that probably would hold 8 or 9 passengers and while dirty it didn't look as old as I was.

The baggage handler got us all in the plane and I looked around for the Pilot. To mu surprise, he climbed in the left front seat and put on a seat belt. I was sitting right behind the pilot so I had a ring side seat to forward and stayed that way because there was no copilot. The pilot did a pretty normal start up and he contacted the tower. With one small deviation from normal. He had to take a flashlight out of a briefcase to read the gauges as panel didn't have any lights working. He even had to keep the light in his lap to change from ground control to the area control after takeoff.

It was kind of windy and there was a cross wind that probably wouldn't affect any of the jets. Our little puddle jumper bucked and rocked as we moved out to the active runway. he was cleared for takeoff and moved to the middle of the runway. I was watching the lights on the right and when the pilot got up to what I thought should be takeoff speed, he pulled back on the yoke. The plane lifted about three feet and he put it back down on the runway. He did this about three times and on the third time, i noticed the runway lights on the right were right where the right tire was. The pilot still had about a 1/4 mile of runway ahead, but little of the width left. He must of finally noticed the seat on his right was forward and blocking the yoke and as he threw it back upright, he took off and it seemed that everything was almost back to normal.

Just about the time we got up to our cruising altitude. the passenger door on the right popped open and the guy on my right grabbed it to keep it from slapping open and shut. The Pilot asked him to hold it shut on the rest of the trip to Topeka. He did.
Let me tell you the personal safety rules I violated that night. First, I never trust a Pilot that is younger than the airplane we are flying. Second, If the lights on the panel don't work, stop the process, get out and call the FAA. Lord only knows what else was not working including the fact he couldn't read the checklist for takeoff. After the first aborted attempted take off, yell "whoa sucker" and tell the Pilot that you have had enough. Third, don't wait about 15 years to retell the story. Why I didn't call the FAA the next morning and report the incidents is almost beyond me.

I did arrive in Topeka and watched as the Pilot unloaded the bags because there were no other personnel there to help. The Brand new terminal was empty and we were the only people there. I got my bag and got to my car and went home. You can bet your butt on the fact that I never flew on that airline again. Based on the fact that they closed their doors soon thereafter it looked like not many others did either.