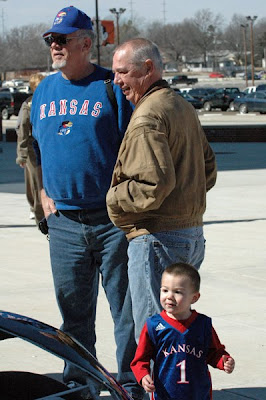 As the Basketball seasons winds down to the sweet 16, elite 8 and final four, the "whatif's" for next year emerge. IF KU wins it all, will the starting five all leave for the professional ranks like 2008? Well, at least a couple are seniors and they will leave no matter what. I see Tyrell Reed attending KU Med next year and Brady will one day be a coach in a winning program. It is our underclassmen Big men that stand before us as possible transfers to where the chant is "Show Me the Money". The lure of big bucks might be enough to take the Morris twins their separate and different ways. Will the responsibility of a little sister lure T-Rob to go pro? I'm sure there is a team somewhere, even over sea's that will want to pay Mario Little to rebound with the big boys and play like he loves it.
My biggest hope is that no matter what happens to them, they have taken the opportunity to get a good education. I have a niece that is about as smart as they come and she hates accounting. But, somewhere down the road, she will know what the hell her money is doing, or what other people are doing with her money. I think any student that completes a four year degree needs to have accounting 101 & 102. Then if at the end of their careers, they have no one else to blame for where did the money go. Ask Mike Tyson is your money will manage to slip away or have enough left to live on?
Barb told me that we might have a problem on our vacation. It looks like the Government is having trouble getting its budget together and may stage a shut down on the 8th and we will be just outside Zion National Park. We might not be able to go back in the park on the 8th. I guess we'll have to see as much as we can on the 7th. We would travel back to Las Vegas on the 8th. Darn, I hate it when that happens. I guess we'll have to see the sights of Paris, New York and the Caribbean. I'm sure there will be a water show at the Bellagio or two worth the watch. The last time I was there it was too windy and they didn't run the fountains. Oh well...
Dave's Mother-in-law will be over for dinner tomorrow. Sandy and her mother are her in town trying to finish up the property of a dearly departed daughter. The really nice thing is that Dave and his wife and the boys, Tyler and Austen will also be here. I promise you that life isn't dull when they are around. Dave knows how to have fun and the boys love it. They will make sushi with the candy Peeps and fruit roll ups. It is a hoot as long as the microwave lasts. It is pretty new so I'm not too worried.
Oh well, better get on with the show. Did you get a chance to watch the hawks as they played their 37th game this year? As the only number one seeded team left, they sure played like one yesterday.
MUD
Posted by MUD at 10:25 AM