Ok Lord, Just how big is a Cubit?

I think we are on the verge of those 40 days and 40 nights of rain.  Things are officially soggy right now and more rain in predicted.  We have avoided those winds that makes circles (tornadoes) and hail .  It is typical of most springs here in the heartland and it takes all day to build up heat and clouds then look out world, there will be hail to pay somewhere.  I am sure the motels are full of people that are out chasing the storms across the plains from Oklahoma City to Lincoln.

In 1983, we were home on a Friday night near the City of Topeka.  Our dog had escaped and was out wandering around so I took the car out to see if I could find him.  After making a quick search I went home.  As I drove into the driveway, it started to hail a fairly light hail but it was in a rain cloud that was seriously trying to soak the ground.   I pulled into the garage and went to the door to look outside,

By the time I got through watching a flock of birds trying to fly in circles, I realized that when the roof of a house exploded and the debris filled the sky along with those birds it was a clear air tornado.  You only see those large dark pyramids when the tornado flies over a freshly plowed field.  They are really dramatic but even the clear air one's can tear your roof off.   I went to the door to the family room to see what the TV was reporting.  Our son was sitting there and mad that the TV was off.  The power had gone off and I couldn't operate the garage door either.  He said that there was a tornado reported way down south along highway 75.  I thought that it must be directly Southwest of there and we needed to get into the downstairs room.

I called out to Barb who was upstairs to come down and we all went in to the small bathroom downstairs.   That was all done just before the debris started to hit the house.  I told the wife that there goes the roof when the whole house shifted and moved about four feet.  The movement caused the daylight to stream into the bathroom and then I was hit by a wall and it all got dark.  I guess the house started to roll and then just tipped back into a new place.  Barb and Dave were is a pretty protected place but I was in a large pile of rubble that the house was holding down.

When the rocking and rolling stopped I could hear Barb but I was way too buried to see her.  I told her to get out of the house and I would do my best to try to get out.  I am pretty sure that it wasn't long, but it seemed like an eternity that I could lift up a part of the pile and crawl a few inches forward.  That's what the next few minutes were like.  Lift crawl, life crawl until I got to the end of the pile and could get out.  I never felt anything like the freedom of that moment.

There was a burst water pipe showering the basement and I could hear a broken gas pipe behind the house making jet sounds.  One spark and the whole place would have been toast.  I am not sure who it was that helped me shut off the water so the basement wasn't flooded but a man that worked for the Gas Service Company came down the street and crawled under the back side of the house and shut off the broken gas meter.  It was all there, but want a strange angle it was. 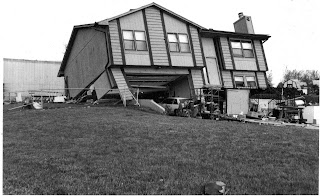 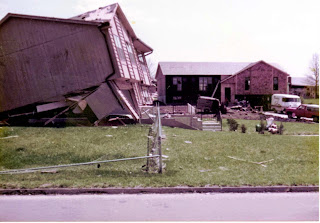 I am pretty sure that of the garage door support had not landed on the back of the Malibu, I would have been crushed as the house settled back into the family room.


So, if you see me looking at the sky﻿ with a worried expression, this is why.  That was about 32 years ago and I still have moments where I feel claustrophobic and just have to get up and go look at the weather outside.  Hope you don't have those feelings and have a safe place to go when it storms.
MUD.