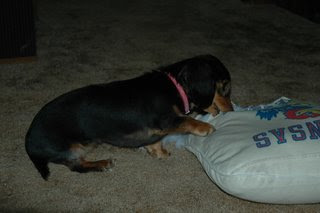 
It might be strange to some people that there is a discussion of money and basketball. The Internet this morning and the local paper both had articles about the time lost (time is money, how fast do you want to go) and revenue generated by Basketball at the college level. With games now available to watch on NCAA.com I can imagine that there are a lot of fans sitting at their work desks with the volume turned down and watching their teams win and lose. The estimate is that the top five teams in Men's basketball earn a total of 100 Million dollars. KU brings in the rear of that pack with just over 21 Million. Throw in a final four or a championship and that skyrockets by a couple of million from fan products. Try to imagine how many T-shirts need to be made to generate two million in revenue from just the Logo.
The interesting thing to me is that you can go down the list and you have to go beyond the top 25 to find another BIG XII Team. Now, that is just the Basketball revenue. Talk football and I'm sure that you'll find Texas, Nebraska and some additional Southern Division of the BIG XII teams right in there.
This morning I feel a lot like the morning after. Two days of eating and watching games has me feeling all out of sorts. I'm quite sure that the red cedar pollen count being above 30,000 PPM doesn't help the red burning eyes and runny nose. Yesterday after the KU game we went to Sam's club after going to the Post Office. It was nice to get out a little but that three pound sack of Pistachios won't help either my blood pressure or my waist line. Throw in looking at this damn screen and reading a book has my eyes just a mess.
I hope everyone out there in reality land is ready for a big tax increase. The Budget Management Office has projected the deficit over the next ten years at 1 Trillion dollars. There is just no way the congress can sustain increasing the Health Care Costs, additional revenue to Schools and Government support for Housing without a big tax increase. Government is expensive, big government is really expensive. How much of that elephant do you thing we can eat? If it was possible for us all to pay our portion of the National Debt, I would sign up right now to pay my part. The problem is that I would be the minority and our children's children will be the bill payers.
I am not going to run out there and blame it on Obama. The congress of the United States is really in charge of making the money flow. The President is only the Budget guy because it comes out of his office. The real masters are the people that actually expend the money. They are the people to blame. Harry Reid and Nancy Pelosi are the leaders in the House and Senate. It is their leadership in spending that will build a train from Disneyland to Las Vegas and no one will have the money to ride it.
I finally heard a story about someone I know that has found the credit crunch hit home. A friend saw an ad at Nebraska Furniture Ad that said up to $2,000 with no interest for 60 days, same as cash. When she sat down with them they told her that her limit was $ 750.00. What impact is it having on you and the people you know? Yes, she said she would com back and pay cash when she has that much.
It is cloudy and 60 today here in the Heartland. Predicting some rain but as much as we need it, we won't get enough. Have a great day out there.
MUD
Posted by MUD at 10:42 AM