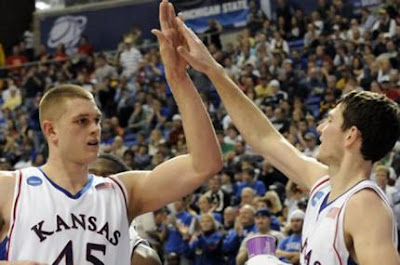 For the record, the NCAA Men's Basketball Tournament committee was right on the mark for the most part. Out of the top 16 seeded teams, 14 of them are still in the Sweet 16 brackets. Arizona is still in there playing and Purdue (5) won their way in. The other 14 are either 1,2 or 3 seeds. That's an 87.5% score for their picks. I think this shows that in Bobby Knight's thinking that even if they expanded the field to include one more bracket and thus 128 teams, in the end the cream of the crop would for the most part play in the end. There has never been a 16 seed beat a number one seed in 100 games. Looking back across the years the final four has almost always included a number one seed. (I edited this, my count was off by one bracket for a total of 16 teams not 12)
Between the burning field to our south, the Red Cedar pollen count at over 30,000, one good book read and almost constant basketball for 4 days, my eyes are a disaster zone. Yes, playing solitaire on the computer hasn't helped. I don't feel like I need sleep, but just shutting my eyes feels good if done long enough. Like a little kid, if I do that for very long (more than a minute) I fall asleep. I may make a trip to Walgreen's and see if there isn't some eye wash product with my name on it. Barb probably won't admit it but I hear her over on her computer sniffing every once in a while. I can take antihistamines but nothing to relieve the stuffiness once it sets in.
The weather man is watching a pretty strong storm front that is moving in today. They have predicted thunderstorms as far south as Dallas and Blizzards across the Dakotas and in to Minnesota. All we need is about two days of 1/10th of an inch per hour rain. We don't need our toads strangled or our rocks pissed on like a cow on a flat place. We are ready to start putting plants out in the ground and moisture is needed.
It will be warm enough to ride this morning but way too windy. Oh well, there is spring cleaning to do. Now if I can work up the desire to kill dust bunnies.
MUD
Posted by MUD at 9:13 AM