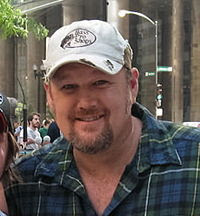 One of the hosts or roasters said it was tough to play it straight when they are really roasting a caricature of a person rather than the real person. For the record, Dan Whitney grew up in Nebraska and started working in comedy in 1985. From his start, he has worked to build a persona that pokes fun of the very rednecks that comprise his fan base. As Larry the Cable Guy, he can earn $250,000 a night on tour and reportedly made 35 Million dollars last year. If that is fraud, only jealousy makes me want to call foul.
I enjoy the good natured kidding the Redneck Comedy Tour group does with each other. The throw together team on the roast on Sunday night was the biggest group of foul mouthed, who cares-who-they-are comics looking for a payday. I get so tired of hearing about Lisa Lampanelli and her love for screwing black men that it ceased to be funny several roasts back. Then they brought up Warren Sap who could deliver lines but I'll bet a writer had to put his material together. First of all, I can bet a black man doesn't watch the Redneck Comedy Tour any more than I watch rap music or BET.
If you think Warren Sap was bad, how they got Gary Busey out of his coma long enough to appear on stage is amazing. Shows you how hard times are when you don't wear a helmet and ride motorcycles in California. Did mention Marsha Brady? She was so memorable I don't even remember her name. (Maureen McCormic)
The biggest frauds about the program was the constant poking fun at the other roasters prior to finding anything funny to say about Larry. If the Dias had been covered with people that anyone knows, it might have been different. The only person I have seen lately out of the crowd was Jeff Foxworthy. As was typical, his was the only part that I would have wanted my mother to hear. Hearing a bunch of broke comedians poke fun at two millionaires was in its self funny.
The really sad thing is that the Comedy Channel will re-run this roast until everyone in the USA has had a chance to kind of vomit in the back of their throats at the real lack of funny.
What kind of an ending could I find for this rant? Get 'er Done. I am.
MUD
Posted by MUD at 12:46 PM