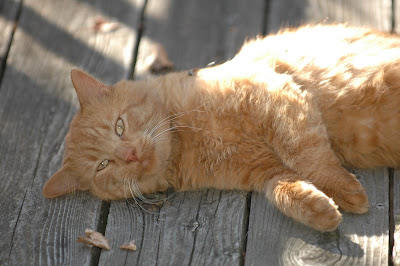 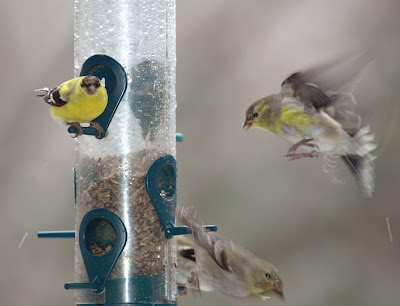 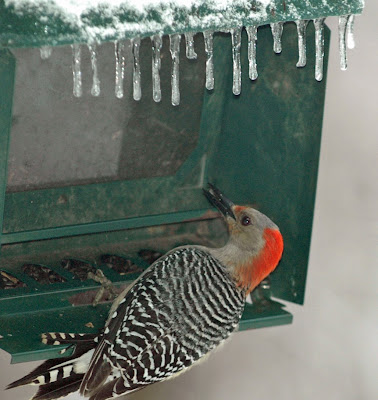 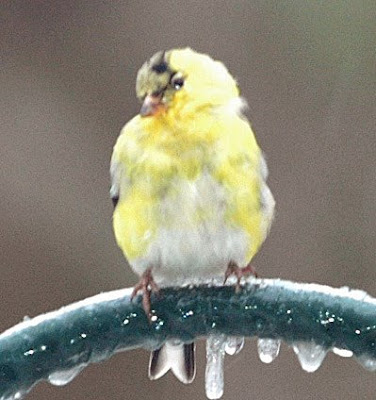 My feet would have froze to the pole 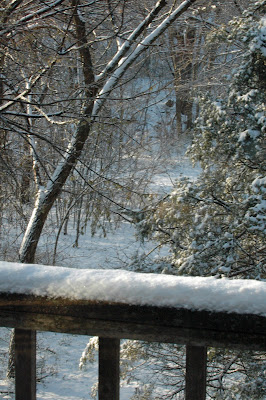 View to the south of the house

I am sitting here looking out the window to a beautiful sun shinny day with just enough snow on the ground to cover the leaves and over winter debris. The birds are up close eating the rest of the really cheap bird food I poured on the ground to get rid of it. When the squirrels don't eat something, you know it is bad. The millet in that stuff is covering the ground in several places. They sifted through it yesterday and ate anything that resembled other stuff. There is one really scroungy looking squirrel below the sunflower feeder trying to find some sunflower meat in the empty shells. If the weather hadn't coated the feeder with ice and snow, he would be trying to get into the feeder. Once or twice a trip, it will shake it enough that one or two seeds will fall out but mostly it is just a trip up the pole and a fall down. All in all we have about 2 or 3 inches of snow and about 1/2 inch of sleet pellets underneath that. I would estimate the moisture from this snow to be between 1 and 2 inches.
Thanks to Flea's contest, I had Chicory coffee for breakfast this morning. It is a blend unique to Louisiana and I'll bet most of them sweeten and cream it so it goes nice with a beignet. I have always liked my coffee black (I add a little salt to cut the bitterness of the chicory) Beignets are a lot like the sopapillas you get at the end of a Mexican meals here in the Heartland. I'm not sure that they serve them with honey down south or not. They are basically a fried bread product rolled in cinnamon and sugar. What could be bad about that. OK, the food Nazi's will tell you that they probably exceed the total fat amount you are allowed for a day. Barb tells me that you should not exceed two tablespoons of fat per day. For me that is generally about what it is in the burger and fries I get.
Well, the NCAA Men's Basketball Championship still has one BIG XII team on board. About 6 PM today, we will see if Blake and his bunch of Oakies can beat Roy's Boys wearing blue. The reason I say about 6 PM is that no matter what the game is like during the game, it is the final score that counts. The Newspaper headline said KU lost their game in the final two minutes. No they didn't. They lost it when the buzzer went off and they had a lower score. Ask Memphis how long it takes to tie up a game. I thought a long time ago that the "Tar Heels" should have more black in their uniforms and lose that baby blue color. I think the Georgetown industrial gray uniform looks cool (except this year they were beaten frequently and often - You know, like a rented mule). Yesterday several sports writers were asking Sherron Collins and Cole Aldritch if they would come back next year or go to the NBA. Crap, they hadn't even dried off from their showers after the game and these guys want to know what they are going to do. Once the sweat dries, they will have time to decide where their finances and family are. Sherron already has a wife and son so he may have to go pro. Cole is just a student athlete and may stay. No matter what, there are new kids coming that will help the team next year. Did anyone but me notice that Brandon Rush scored 29 points for Indiana Pacers yesterday? He was that guy that stayed three years and was supposed to be a "One and Done" player.
If you have read this blog much, you probably have seen pictures of our out door cat, Tiger. He is just the same reddish gold, stripped color that you see on most feral barn cats throughout the Heartland. He generally shows up at least every other day to eat as much as I will feed him and to sleep. There are times he will come home with a war wound or two but he heals quick and it must be worth his while to go visit the local farm where the girls live. He will let me pet him if I will feed him. He hates the brush and I don't get a chance to help him knock out the fur balls that build up this time of year. Today he is off visiting the girls and wasn't out there to eat a hand full of cat food. Oh well, He'll be back, or not.
If you had a car with 100,000 miles on it what would you do? Do you replace it with a road worthy car now or when it stops and breaks down. So far it hasn't left us stranded but I always wonder. Barb is the hard sell in the family and she is more the replace it when it dies type. That is probably the story of my life. I would have little saved and no new toys and barb would never buy a new toy and have most of her money saved. Together we are just the right blend, kind of like a bride... Something borrowed, something blue, something old and something new.
MUD
Posted by MUD at 9:50 AM