Once Upon a Time

This Picture has nothing to do with the following story. It is here to show you what happens to your Pan Chocolate when the special K's get a chance to share breakfast with you. Yes, that big croissant has chocolate in it and the girls know which one is best. 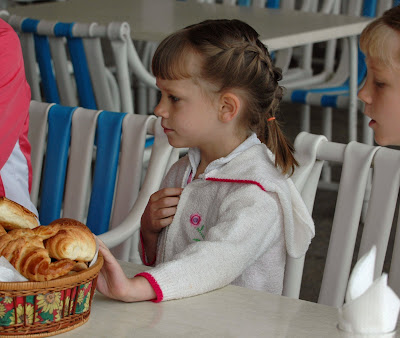 In 1968, I was assigned to the 1st Bn, 92nd Field Artillery in Pleiku, Vietnam. I was a new Lieutenant, just married and so full of piss and vinegar that I didn't know what I didn't know. I was assigned as the Battalion Ammunition Officer and had as an additional duty, to fly convoy cover as my trucks hauled ammunition to resupply the Ammunition Supply Depot in Dak To. For the most part, the ammunition there was either used up or blown up during TET in Early 1968. The North Vietnamese Army swept down the road from the Tri border (Cambodia, Laos and Vietnam) portion of the Ho Chi Min trail and darned near wiped the area clear of US Troops.


One day after a morning of convoy cover and lunch, the pilot of the Bird Dog asked me if I wanted to see a little different part of Vietnam from the normal route from Pleiu to Dak To. We had been up and down that road for a month once a day and man was I ever tired of the same green jungle. On a lark, we took off while our trucks unloaded at the ASP and decided to fly directly east to where the border of Laos and Cambodia met Vietnam. The pilot told me that he had been told that daily enemy convoys were being driven up and down the trail and it was a target rich location.


We flew along the road headed east and watched as the road grew smaller and smaller and less of a road until it was almost a path barely one small dirt path wide. The further east we flew, the less signs of people were there until we flew directly towards a small set of hills the edge of my map was of border of Vietnam.


The pilot flew parallel to the ridge line of those mountains and finally pulled back on the stick and gave the bird some right rudder. Holy Shit Batman, not only was there a convoy along the Ho Chi Min trail, it was a heavy truck convoy and at the front and rear of the convoy was two of the meanest looking guns. They looked like a quad 50 and we called it a ZSU 23-4. It is a radar guided anti aircraft weapon with four 23mm guns and we flew right up on them. I'm sure that even if they hadn't heard the plane, they could hear the pilot swearing and telling me to do absolutely nothing until he got our plane back over the ridge top. We didn't draw fire because they were as surprised as we were. Had they been the least bit ready, that bird dog, one Army Pilot and his 2 button LT would have been smoked like a filter less camel. I'm sure that Mrs Petty would have been notified but there wouldn't have been much to recover.


When we got back over the top of the ridge, I got on my radio and notified my Battalion Headquarters of what we had seen. There was a 175mm gun unit nearby and (Wink-Wink) they were not in range and did not have clearance to fire into Laos. I'm sure that all the jets that flew that direction did not drop any bombs or strafe that trail. The pilot and I were ordered to fly straight to Pleiku and make a report. For some reason, I counted the trucks and ZSU 23-4's that day. The last thing I remembered seeing was a bunch of guys running back to their trucks and wondering if they had to start up the radar units to fill our tail full of lead.


I'm not even sure what month that happened, I was just sure that I was one lucky son of a gun to have surprised them as much as they surprised me. We didn't go out that way again in a bird dog. There was a day when we visited the waterfall behind a Mountangyard village but that's another story for another day.