Where have you Been? 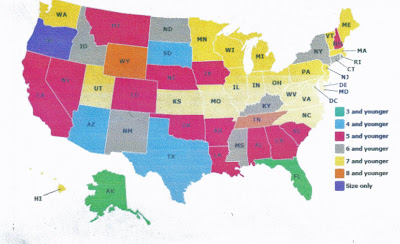 I did a booster seat quest on my computer and it gave me a map of the US. As I studied it, I realized that I have been in every State west of the Mississippi. It is east of there that I am some what lacking. My parents took me on a trip to Michigan as a small child but I don't even have a glimmer of a memory of that. Going straight east from the heartland and south from there I have been in most of those States.

The States I have not visited are Connecticut and north of there up to Maine. For years I have threatened to go there but the time just hasn't been right. I think this fall will be a wonderful time to be there. I guess it mostly depends on the transportation issue for us.

As for outside the US, I have been in Belize, Panama, Mexico, Spain, Morocco, Japan Guam, England, Germany, France and Vietnam. Oddly, I haven't been in Canada. The stays in Guam, England and Japan were for the most part stops in an airport but hey I put my foot down in those countries. France was a drive through one Sunday and nothing was open and we had no Francs at the time. Now they use Euros and we would have been OK to at least stop at a McDonald's on the highway.

For me, travel is more a matter of time. If you are somewhat limited, take a tour with a guide. There is no way we could have even begun to enjoy the variations of Morocco without our friends. Germany was seen through the windshield of a car and a lot of autobahn miles. Both were meaningful for me. An elaborate schedule of room reservations made Barb feel better when we traveled but for me, I enjoyed the freedom of just stopping where we wound up for the day. I will admit that there is little chance that I would find as nice a beach hotel as we had in Rabat, and nothing near as inexpensive. Our small room in Spain was more expensive than two rooms on the beach in Rabat.

Today is cloudy and cooler than yesterday. Our AC has bit the dust and we are going to meet with the guy tomorrow to discuss the matter of replacing the AC unit or the whole heating and cooling unit. It is really a matter of pay back on the new unit. The system we have here is 20 years old and pretty good. If we can get one that pays its self back in 5 or 7 years we might replace the entire unit. Otherwise, we will just replace the A-coil in the cooling system.

Have a great day out there.