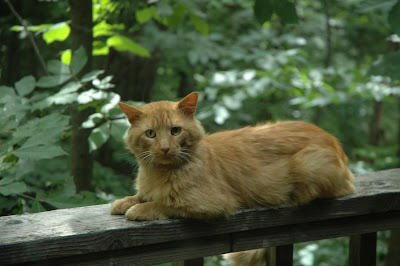 The heat index hit 106 yesterday and it hit an honest to god 100 here in Topeka yesterday. Barb and I took a short road trip and when we would stop or slow down in traffic the AC would almost get warm. Way to hot to be out and about for long. Just as I saw it was 102 in Lawrence we saw a guy out on a mower. Crazy Man.
The new Garmin nuvi is very interesting. It did not find the Price Chopper store until we were in Kansas City. The good news is that it is right at the end of the 18th street expressway and 48th street. That store has produce from Mexico that I haven't seen any where else. Their cuts of meat were great for grilling fajitas and a sea food selection that looked great. We didn't partake of any of the meat because of the temperatures. We have one of those silvery bags from Sam's club but even with that it was way too warm for fish and an hour long car trip.
Yesterday on the cooking channel they showed two programs back to back that had my name written all over them. The first was my favorite fried foods section. What's not to like when Jiada De Lorentis eats fried doughnuts and they had tempura fried bacon. That program was followed by my favorite, BBQ. This close on the heals of Father's Day I still have some "Planned Overs" in the Fridge from Sunday. There was one dish that was BBQ shrimp. Not just shrimp on the Barbie, but cooked in a dish of hot sauce, butter and lemon. I'll bet I gained ten pounds watching that program. There was one segment where they covered Salt Lick BBQ down by Austin. I have been there and am not as big a fan of the hot vinegar based sauce in Texas. If they would let me bring my KC Masterpiece Hickory Smoke flavored sauce I would eat there often. (Or at least every time I am near there) I have started to put brats on the grill to serve with my chicken and steak. Oddly enough, I don't use a lot of BBQ sauce on the grill here. I believe that a good marinade and smoke flavor is just what the doctor ordered. Oh well, too hot to grill today.
Our porch cat was gone for a couple of days but arrived home hungry and full of weed stickers. He let me comb out most of them as he ate. If busy he will tolerate the brush. If not, he will hiss and bite. He still isn't too crazy about using the steel prongs on the tail when it is full of stick tights. I would feel better if he could gain some weight. I guess with all the traveling over to a nearby farm to visit the girls he just burns it off.
On an earlier post I mentioned the Flint Hills of Kansas. Those rolling hills don't seem like much at 70 MPH on the turnpike but get out and walk them and you'll see why I love them as much as I do. I know that Barbara loves them because she never missed a chance to take me to the Tall Grass Prairie or to one of the events scheduled in the Heartland. If you would like to see what's out there go to: http://flinthillsofkansas.blogspot.com/ I want to ride my recumbent in the Wamego 4th of July parade just one time.
Have fun out there.
MUD
Posted by MUD at 9:00 AM