This is the lion in the park in Ifrane, Morocco. The story is that a member of the Foreign legion carved it years ago and now everyone loves to have their picture taken with it. 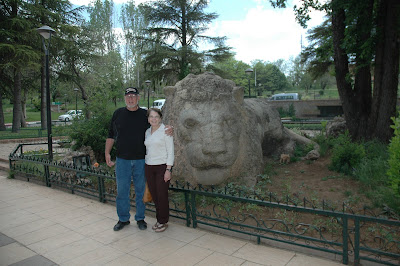 Let me be the first to admit that I am not a techie when it comes to computers. I am a long time user and or the most part have learned to use the computer hands-on. There seems to be a move afoot to make it more difficult with each new machine on the market and I am nearing the time where I am not able to learn more and more complex things. It seems that I forget more than I learn and pretty soon I'll be expert at nothing. I, at one time, could learn a little about everything and be a mile wide and only an inch deep. I am more like a 1/4 mile wide of damp and getting drier.
I am sure that a part of my memory problems is based on my lack of "give a shit". The news is so depressing that I have for the most part have stopped watching. It occurs to me that no matter what I do, the world events just don't really effect me anymore. Unless and until our Government starts to draft us old retired guys, the elections in Iran just aren't my concern. It might be nice to know exactly what the weather is going to do but no matter of my awareness, the weather will happen. I can walk outside and know it is early summer here by the humidity and warmth. One cold front passing can stir up a heap of bad weather when the air is like this.

The other day, Face Book offered to change my name from a bunch of numbers to Dennis.Petty. Yep, changed it and now I am trying to make my account more relevant. I hate it when I pick out a bunch of pictures and start loading. The little chat window pops out and sure enough the half an hour I just spent goes for naught. If it would stop loading the pictures and half of them would be there, I wouldn't mind. No, they just go away. Nada, zilch, nothing.

Yesterday was the services for the late Athletic Director at KU. Dr. Bob Frederick was riding his bike in Lawrence and hit a pot hole. Never did hear if he was wearing his helmet but he did hit his head hard enough that he died. The paper said he was like a cowboy and "died with his boots on" doing the thing he loved. That's the way I want to go. Fast with a smile on my face. My last words will probably be like Butch and Sundance as they jumped off the cliff, "Oh SHHHHHIIIIITTTT!"