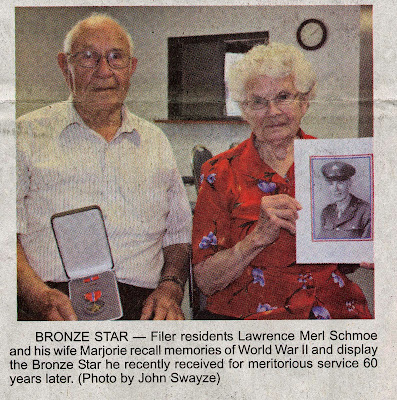 A lot of Attention is paid to the Invasion of the European Continent on D-Day. This week marks that event plus 65 years. I in no way mean to lessen that accomplishment, I want to make sure that you all know that many of our service members were engaged in the war long before that historic event.
In 1940, the National Guard was Federalized for a year to help bolster the ability of our Country to protect its self. This Mobilization helped give the Army a base for the leadership positions needed to expand the Army by many Divisions above the peacetime allowance. A lot of the officers needed came from the NCO Corps of the Guard Division. These Guardsmen we told that they would be needed for only a year and when Japan bombed Hawaii, they found themselves in the war for the Duration. For many that was from 1940 to 1945.
The Army, Navy and Marines fought in the Pacific for many years prior to D-Day and to many of them it seemed they were in a Forgotten War as assets were sent to England and our troops in Africa.
My Father-in-Law was a combat Infantryman that went ashore in Italy as a replacement as the US troops built up to break out of the beachhead at Anzio. His unit spearheaded the push into Rome and maintained combat with Germans as they continued to push up through Italy. His award was the Combat Infantryman's Badge (CIB) and a ruptured Duck (Victory in Europe Medal). I was made aware of a provision in the Military Awards Regulation that made the Award of the Bronze Star for recipients of the CIB by my sister-in-law Judy. Having served as a Military Personnel Officer for a couple of Years, it was natural for me to make the application for Dad to be given the Bronze Star for his efforts. None of us realized that it would take almost two years to get it approved and awarded.
This past Month, my Father-in-Law, Merle Schmoe was finally awarded the Bronze Star long after the war was over. To him and all of the other Service members, of that and all wars I offer a salute and a promise that when our days here with our families are over, we will meet at Fiddler's Green and share a canteen of an appropriate Muzzle Blast and tell war stories until we have laughed and cried over and about our friends. Those days are short for the WWII veterans and I hope long for me but they will happen.
MUD
Posted by MUD at 9:23 AM