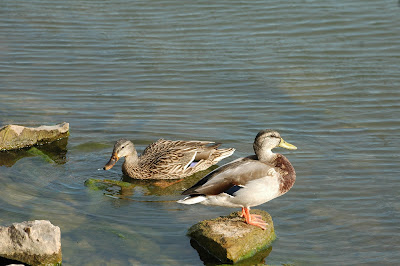 Try saying this headline fast four or five times - Firefighters, Stuck Duck. Seems like it was a slow news day and the AP picked up a story about a Duck in Sante Fe, New Mexico stuck in a chimney. I won't even start to tell you what my dyslexia made the headline into. I have a couple of firefighters in the family and love them way too much to ever utter a discouraging word about them.

Looks like the Democrats are working on passing the Health Care Bill by the back door. The next sound, if they do, will be the door closing on their careers up there in Washington. I have an idea, lets throw them all out and start over. NRA - Never Re-elect Anyone.

This morning, Barb went upstairs as I was working on the computer. Pretty soon, I smelled cinnamon wafting through the furnace air. She brought me the best cinnamon/raisin toast I have had in a long time. Add a half a banana and finish it with a great cup of coffee and it doesn't get much better. The only thing that could have added to that is the taste of the oranges she brought home from Sam's club the other day. They were as big as grapefruit and so sweet.

Barb had put the Valley Brook house on Craig's list and already has had an inquiry. I guess that $8,000 stimulus bill just might stimulate people to look far a house rather than rent. We'll see.
Better go and see if there isn't some things need attention after being focused on the other house. I'm sure there is a dust bunny or two that needs killed.