Our Son Dave and Big Bird 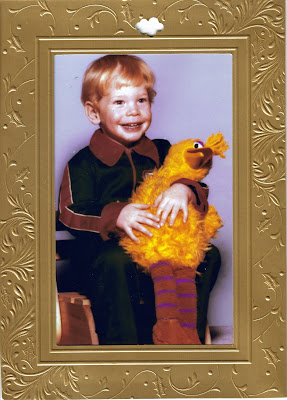 The paper this morning had an article about a past headline that read, "Woman Blankets Unit." A woman sent her husband's unit blankets to help out the local people in Iraq. They said that Unit is a hidden reference to the male appendage of a man and it caused a furor. Does anyone else remember the nickname of one of the big basketball players? "The Big Unit." Does anyone with a modicum of Military experience know that unit is a Military term and used almost by everyone. What unit were you in in Vietnam? I refuse to step so low as to stop using Unit because one "jackanape" misused it. I am very tired of Political Correctness also. Do you know what is big and black and filled with seamen? "A submarine."
Gee, aren't you glad that there is so little that gets my blood boiling. With the cold weather last night, only traffic accidents and stupid comments are the sum total of the paper news. Oh no, an ambulance was called to Tiger Wood's house because his mother-in-law was having stomach problems. My mother and mother-in-law would both be having kittens if I was caught doing stupid things with bimbo's. I'm pretty sure that dad's bones would have rattled in his grave were I to do something so stupid.
As I look out of the house to the south, it is pretty and cold. The birds are fluffed up to almost look fat and they are working the feeder hard. The ground has about three inches of snow on it and the branches have about one inch of snow. It has warmed up to 6 degrees at 8:30 AM and the wind is blowing between 15 and 25 MPH. The other day, my brother-in-law was out and the temperature was near zero and they said the wind chill was below zero. I think we need to have another word when the temperature is zero. When you talk about the effect of the wind with the temperature below 32, it should be "Wind Freeze". There isn't any chill in it.
I am working on the framework of a pretty good rant. It concerns my true feelings about where the Government has been taking us for the last year. If we were on a slippery slope for 8 years, now we are on the mother of a Roller coaster ride. If Washington was spending money like a drunken sailor then, what would be an adequate description now? When will the current administration stand up and take full responsibility for where we are going. After a year, it is pretty clear that the Bush Administration is not still working on Cap and Trade and a health Care Bill explosion. This one belongs to the current President and the Congress.
Oh well, when asked if I am happy, your answer should be, "Not so Much."
MUD
Posted by MUD at 9:17 AM