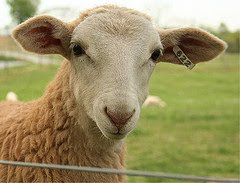 Our Friends in Morocco reminded us that EID was a holiday there in Morocco and it seems that each family sacrifices a sheep during that holiday. It has taken me many years to overcome my experience with mutton. I will eat those great lamb chops at the Star in Elko, Nevada but only once in a while. Here's why.

As a kid, My uncle lived with us during the summers and worked second shift at Beech. I think he was attending a Junior College in Hutchinson and working on a teaching degree. One summer, I noticed that Hazen had a first baseman's glove in his car. It had laid in the rear window until it was black on one side and brown on the other. I asked him if I could use that glove to play little league. "Sure Kid." I was in hog heaven. Then I realized that the glove was so stiff that it was all I could do to hold it open to catch a ball.

I asked my dad if we could go to the hardware store and buy some neatsfoot oil for the glove. Nah, I have just the thing for the glove. "Tallow." Now imagine, if you will, that someone takes a very old sheep and puts it in water. That horrible old smell of wool condensed into a grease that was way beyond rancid. Rub that stuff on the glove and even the dog wouldn't chew on it.
In fact, that glove smelled so bad that when I used it, the team would make me leave it outside the dug out between innings. I don't remember anyone ever asking to use it.

I went to Vietnam on the USNS Geiger and we were served meals in a pretty fancy dining room. The waiters actually took your order and served you. Somewhere mid trip, Mutton appeared on the menu. The kid from Kansas had no idea what the hell it was but at least once I would try about anything. The first bite of mutton tasted like that glove. The more I chewed that mutton, the bigger it got and the more convinced that there was no way I was ever going to swallow any or all of it. I finally had to spit it out in my napkin and excuse myself from the table. At least I could take an apple and get the taste out of my mouth. There wasn't even any booze on the ship to help get rid of that taste.

OH well, no mutton for me.