MUD IN THE SNOW 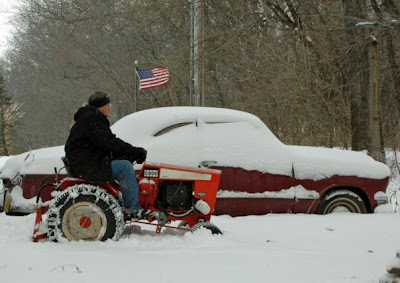 Things here in the heartland are pretty, pretty deep in snow. Here I am trying to get my tractor over to where the snow blade is located. Old me, old car and a flag in the background. Hey, isn't that the title for a Country Song. Took me about an hour to get the tractor started and the chains on. I made one pass out the drive and blew a chain. I came in to warm up and didn't get back out.

I am not sure if I will even try to get out in the snow again today. I may attempt to make it to the store as Barb tells me we are out of dish washing soap, popcorn and hot chocolate. We seriously have enough food to last at least another week.

I cooked my first duck the other day. It was very expensive and didn't yield near the meat that even a chicken does. A six pound duck was barely enough meat for four people. The package had an orange sauce in it and "Duck la Orange" was pretty good. I was put off by the greasy meat when I de-boned the duck. After a short stay in the fridge it wasn't bad. Don't think it will be on my short list of things to eat soon.

I think I will go up and make the last of the smashed potatoes into pancakes for breakfast. That and a good cup of coffee just might inspire me for another adventure in the snow.

Dave just called and he was finally able to dig his car out of the drift and made it in and out of his driveway. I saw some red way up the drive out by the mailbox and found three days of newspapers in one package. Now if the drifts will let me get to the store so I don't have to do dishes by hand.