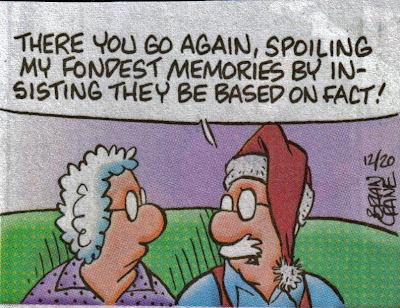 Once upon a time, there was a bright eyed kid on the East side of Wichita that believed in all things Christmas. He loved the colors, smells, and sounds of everything that happened in December. He would sing the songs of Christmas and hope there would be a little snow to make it look like the winter scenes on the Christmas cards. He never rode in a sleigh going to Grand Ma's house but that didn't stop him from dreaming. While he never got everything on his Christmas Santa letter, he did get a lot of love from his parents, his family and friends. I am sure there are about a million Christmas cookies that have passed through his taste buds to brighten his Christmas's. For some reason, the red and white striped candy cane cookies were made in abundance and he never met one he didn't like.

I guess all I can say is that I hope your dreams, fantasies and realities get mixed up and you to can find a good reason to have a Merry Christmas. Yes, I will not give up to the Politically Correct Crowd and wish anyone a happy holidays. You celebrate yours in your way and I will write what I want in my blog. After all, it is my blog.