Baby, Its Cold Outside! 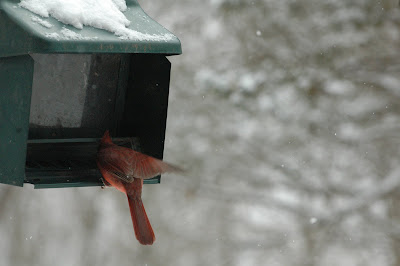 Officially out of the wind it is 2 degrees. With at least a 20 MPH wind blowing it is so far below that even with my triple layer of clothes it is not fit to be out there for any period of time. I walked out to the end of the drive and found no sign that the newspaper person had even attempted to deliver a paper. I cleaned off the back porch and scattered new seeds and now I'm inside trying to defrost my fingers. The trees are full of birds but no one has the nerve to come down after the racket I made with the shovel. I saw on the weather channel that it was -17 in Denver. I take back what I said about them being so warm for the Denver/KC football game. I was in Denver one winter and it was reported to be about -20. I went out in a light jacket to get the paper and when I got back inside I brushed one of my ears. It made a crunching sound and hurt like hell when they warmed up. Even with the sun today it will not get above 10.

Did I mention that the front porch kitty is now the garage kitty? I have a cloth tool kit that I stuffed with an old wool shirt on a bench and the cat has made a nest in there that looks pretty good. It is a hoot that when he hears someone coming out into the garage he will put his head down and pretend to not be there. Kind of like a kid that says if I can't see you you can't see me.

Well, the calm has been broken and there are 10 juncos and a sparrow on the porch. There is a cardinal that has flown in twice but not landed. The tufted Titmouse are hanging with the sunflower seeds and not on the ground. Oops, hawk was just back and the last I saw him he was tailing a junco at a high rate of speed off into the trees. Barb showed me a picture of a sharp shinned hawk that winters south and they are reported to come into places where birds gather at feeders. 9 to 14 inches tall. That's him.

How about those Jayhawks. They twice have scared their fans with lackluster games and pulled out a win in the last minutes. Memphis and Cornell both played the Hawks close. In fact KU was behind Cornell most of the game and had Sherron Collins not pulled their fat out of the fire they would have lost. I take back any thought that Brady Morningstar wasn't needed.
Stay Warm and inside if you can. The schools are closed today because of the low temperatures and drifting snow. It looks pretty out the south window but I know better.