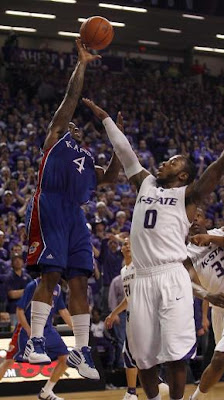 Yesterday we had dinner with Sandy and her Mom, Dave and Barb, Kyler and Austin. Larry, Sandy's husband and Barb Jr's dad was somewhere en route between Vegas and here. It was a hoot to see the kids spending time together playing games on their equipment and phones. It never stops making me be amazed to see the kids pick up a new piece of equipment and without instruction start playing. I have had my iPhone for two weeks and still don't have any music or "apps" (whatever the hell they are) loaded on it. I am starting to use the calendar feature and notes but nothing else-Yet. After a great ""On the Border" dinner we came home to the start of the KU-KState game.

In my opinion, that was the greatest game since the overtime win against Memphis. K-State fans rocked the temple of Doom all day and the Purple Pride team came ready to play. I have no idea how many times the lead changed hands or who led the teams in scoring. All I know is that when it was needed, Pullen and Collins both gave their fans what they wanted. There near the end of the game, to see Aldrich stay on the floor with 4 fouls amazed me. Great teams, great coaches and a great atmosphere made for almost three hours of fun. The only thing that would make it better would have been another case of laryngitis by Dick Vital. Digger Phelps was there for the game day activities but not the game coverage-What the hell? Dick Vital is the most obnoxious commentator on TV. He would talk about the most inane things during the game. I know he is there because he provided color to the game but in my opinion the color is often so far from what is happening in the game it is not funny. At one time he started to list the names of all the players on both teams. Perhaps the ESPN fans didn't know their names but we sure as hell did.

Yesterday morning we awoke to find about a 3/4 of an inch of snow on the ground. All day the temperature worked its way up to just reach 32 at about 4 PM. Where the sun shined on the ground, the snow melted. Where it didn't, the snow is still there. This is typical of the winters in Kansas. Sometime in February or early March we will get one more good snow of several inches. It will last about three days and the daytime temperatures will start their climb into the daytime highs of 50. By the time it reaches 60 for the average, people will be without coats and the kids will be in shorts waiting for the bus in the morning. If you look real hard, there are a few patches of green where the snow covered the ground for most of the first half of January. By mid march green will start to show and by St Paddy's day we will have some flowers here and there.

One lone fat squirrel has shown up this morning to eat all the sunflower seeds out of the mix I put down for the juncos. I'm sure that they will also eat the cracked corn and leave the mullet and milo for the juncos. About a month ago, a sharp shinned hawk started to show up about once each day to pick off a bird out eating here at Rabbit Run. I was watching one day and he caught a squirrel when I jumped up to get the camera, he let it go and took off. A couple of days later, the cat had caught a squirrel and I assumed it was the same one slowed down by injuries. Now as I watch, there is a squirrel that comes down to eat and can't stand up straight and as he eats he leans far to the right until he falls down. I call him Richard Nixon.

My motto is to be sure that I can still laugh at as much as I can. Without joy, sadness is wasted. With out hate, pride is wasted. With beer, everyone (except Barbara and I) can get wasted.