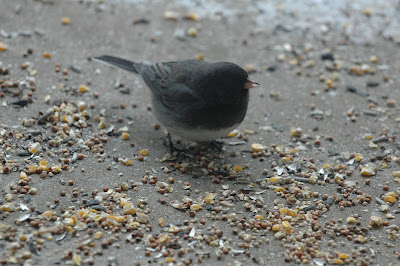 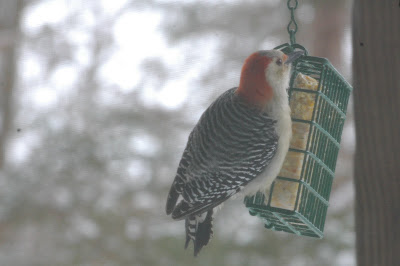 For those of us in the heartland, we expect to have some snow between Christmas and Easter. What we don't expect is to have snow continuously on the ground during that time. In most years the warm air from the gulf comes up and melts one layer and provides the moisture for the next layer. Right now we still have many inches from the last two snows and another cold front is headed this way. If the weathermen/women are right, by late tonight it will also be blowing (or major sucking if you live here) and drifting so the big piles of snow will act like snow fences and allow for accumulation up to three or four feet. After that front passes, we are predicted to have clear skies which means that it will be one cold week through the weekend. To add insult to injury, most of the trucks used to move or remove the snow are old and at least half are broken down. With the early snow, the Governments are also telling us that the money for overtime is about shot. Broke, busted and up to our ass in something. Sounds like the rest of our Government to me.
Early this morning, I awoke to the sound of birds working the feeder at first light. I looked out and there must have been a flock of finches going through and they stopped here to load up on their way. Most have cleared out by now and the Junco's are here working through the debris field to pick out the scraps. Yesterday it seemed that the Milo wasn't being eaten and most of that is gone this morning. I can't tell what ate it. If it was the possum, there would be little hay bales of possum scat to mark his arrival. None of that this morning, just a bunch of hungry birds.
Last night on Showtime there was a comedy show that was made up of native American comedians. It was one of the best shows I have seen in a long time. I guess after watching bowl game after bowl game I needed some comedy. One of them still lived on the reservation and talked about the mentality of the reservation being kind of like a prison without walls. He hated being there but he felt safe? He said this year they had a prairie fire break out and it burned down three houses and 50 abandoned cars. They did manage to save the beer coolers. He said there is a story that starts out, three Indians came out of a bar sober. he stopped and looked at the audience and said, "What, it could happen!" I went to the Labor day Pow Wow this year and I would hope that next year they include John Wayne's Teeth as one of their songs. I don't remember if that song was by EagleBear or Redwater.
The other day I went to WalMart to get some dog food. I left it in the trunk for the extra weight. I forgot that at 0 degrees the canned dog food would freeze solid. Try opening that can. Even if you can get it open, then try to get the dog food out. Barb wanted to know why there is a can of opened dog food on the counter. Long story short (I hardly ever tell one of them) Thawing.
We had the kids over for supper last night and everyone was in a good mood and we laughed a lot. I think that's the first sign of Cabin fever. My daughter-in-law told the Jesus Saves joke and I couldn't wait to get it on the blog. I think working in an office made the joke more funny.
The bird population just got cut by one. One of the Junco flew up and hit the window as a Falcon flew in and picked one of the birds off. I think it was that big fat sparrow but kind of hard to tell. Barb ran to get the camera but by the time she got back the falcon flew off with his prey in his claws. Not as noisy as last year when one of the hawks got a Blue Jay and the other Jay stayed there and made an incredible racket as the hawk ate his mate. Would you believe there are no birds anywhere to be seen right now?
Oh well, they don't call it the food chain unless something up the chain gets to eat things down the chain.
MUD
Posted by MUD at 10:10 AM