Barb on one of Kenny's Recumbent Trikes 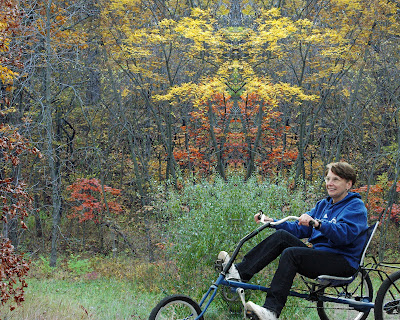 As I ride my bike down the bike path I try to say Howdy to people as I pass. People tend to stare at a recumbent the first time they see it and with the eye contact I shorten the cowboy greeting down to Howdy. No, "Howdy do" is not what Buffalo Bob's companion left in his shorts. It is the greeting that a lot of the old cowboy movies used. Yes, John Wayne used Ya-ta-he which is Apache for "What's up red brother." If you think my bike confuses people, try that greeting on them. Most of the people under 40 don't get it and think I am swearing at them.
For the record, the picture of my better half above was "photoshopped." The picture of her on the trike was taken in a park in Twin falls, ID and the background was our woods here at Rabbit Run. To me, it is an analogy of her. She is not any one thing, but a compilation of everything she does. She can walk into the strangest place and see the beauty. Most often, she takes a picture of things and while I do not understand her system can go back and find them on her computer. As she fills a card with pictures in her camera, she will only download certain ones and runs them through Photoshop@ as she stores them. Each year she puts selected photos on a calendar for her mother. She makes a different one for my mother. For people that don't understand, that's why you see Barb with a camera at all of the family gatherings - a lot. My system is to download them all and only run them through photoshop if I plan to use them on this blog. A small JPEG picture loads a lot faster than one stored right off the camera in a RAW (What the camera sees) format.

I hear that south of here there is a winter storm blowing up out of the southwest and coating a lot of Oklahoma with ice and snow. We have the lightest dusting of snow here. I am glad it is this weekend as next weekend we will be headed down to Austin, TX to see the JayHawks take on Texas in roundball. We will get to see KU vs KSU this weekend and hope that the hawks can take on and win against both teams. It really wasn't fair that in the pre-season the hawks were ranked number one against a bunch of teams that were only good teams. Now that we are in the BIG XII season they will have to take their game on the road and win against some darned good teams. In all of the pre-season games only one BIG XII team lost one home game. That has to say something about how hard teams work to defend their home court. KU has the nations record at 53 home wins in a row. There is something about entering the "Fog Allen Field House" and seeing all those banners. Not to mention the pregame video showing the Champions in action. At Halftime of the Baylor game, they brought out all the athletes that are on the honor roll. They darned near filled the floor and the women's golf team were in the middle with the highest GPA of any team.

The birds are working the feeder over pretty heavy this morning. I am going to have to make a run to Wally world to buy suet blocks and dog food. 'Cides, I will need to get out and "blow the stink off" as my dad would say. Some of his old Navy sayings were often hollered. "All Hands on Deck" was his wake up call. "Grab your socks and drop your......" No, better not go there.