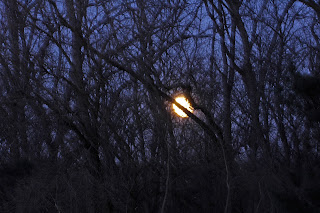 We welcomed in the new Year with a foot of snow on the ground, piles so high that you can't see over them and single digits overnight. Here at 10 AM it just went past 10 with a projected high of 20 for the day. Happy Damned new Year Al. 100 Billion for clean air to other nations so we can halt global freezing, er warming. Another example of Washington not having a clue what things cost or they are worth. That is probably money to the Chinese so they can loan it back to us and both sides make money.

This morning I got up and cooked bacon. I forgot to buy the Hickory Smoked bacon from Kroger and bought some Maple and honey cured bacon at WallyWorld. Sugar tastes great in bacon but it burns or at least turns the bacon dark when it cooks. I don't know why I continue to try that bad stuff when there is such a great brand out there at a good price. My real intent was to have a taste of bacon and some bacon grease to cook the onions for the chili. I got a crock pot for Christmas and I wanted to make a big old pot of the red warm chili with a side of cornbread. We'll see how good everything turns out as it fills the kitchen with the aroma of chili. My mother would make it at least once a week in the wintertime and I would get to run up to the store and get a six pack of Pepsi. We won't have Pepsi but we will have corn bread. I will not put as much sugar in mine as Mom did but I don't have to make anyone but me happy.

Did I mention that we were in bed asleep by the time New Years happened. At least I was, I don't have a clue what time Barb went to bed. I have a pile of good books to read and little encouragement to go outside as cold as it is. I do want to bring the tractor in and put the chain back on the right side. It is predicted to snow again this weekend and the weatherman is as confused over how much we will get as always. The last little snow put us over the December record and I'll bet as much snow as we had last winter we had to top some annual snowfall record.

Barb and I went to Lawrence to do some winter wardrobe updates at JC Penny's. Everything was on sale at at least 50% off and then they gave us a 15% discount when the total came to more than $75. The two winter shirts I bought would have been that much last September. At least I will be on the best warm dressed list if I wear all the good stuff. As usual, Barb bought stuff for everyone else but herself. I think her closet is full and she doesn't want to load it up any more.

Have a great year out there.