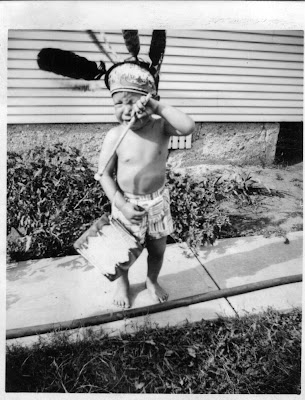 This photo was taken in the early 50's, but it really showed how I felt when I had to leave my new bride and go to Vietnam. I wasn't as scared as angry that there was a damn good chance that I could get killed and make that wonderful woman a widow way too damn early... 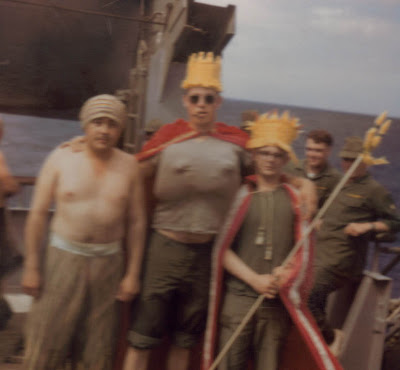 We went to Vietnam on the USNS Geiger which was a slow boat. If it had had a damn keel it would have not wallowed its way across the ocean. I was assigned as the morale officer and asked to organize the activity as we crossed the international dateline. I picked the smallest guy on the ship to be King Neptune, a very hairy bellied baby to be out son and made myself the Queen and in charge of the activity. Each of the members of the battalion that could not prove they had crossed the International Date Line (into the realm of the dragon) had to kiss the belly of "baby" after it was smeared with ketchup. It was one fun day in about 19 days of boredom
Did you notice the photocubes taped on the pillow? Had to give the guys something to look at besides my ugly legs. 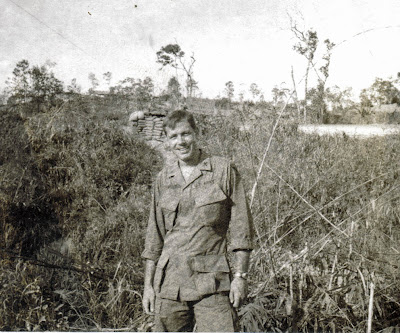 On the back of this picture I wrote that I was only 15 feet from my bed and a beer? Not sure what that meant but again I was in the middle of no where. I'll bet my rifle was just out of the picture. 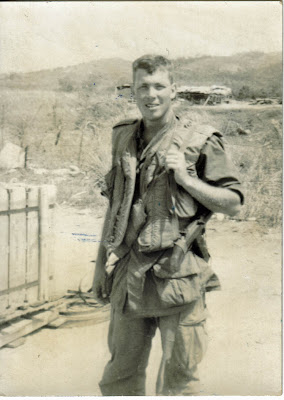 This was taken as we prepared to go outside of the wire and set up an ambush position. I somehow got a carbine with a sawed off stock from someone. I had a radioman with me and my part was to call artillery. If it came down to me and the carbine we were way too deep in it to do any good. 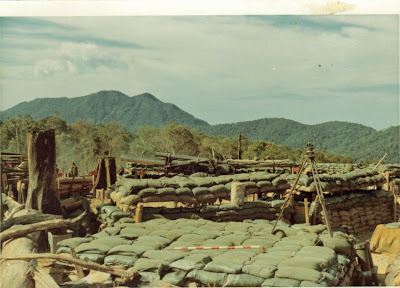 This is the view of the hill top artillery position we were on in January 1969. An enemy soldier got on the far hillside and shot recoilless rockets into this position. As the battery Executive Officer I went out and directed the gun crew to shoot back at that sucker. We turned the gun 90 degrees and fired at least one round at him for each one he shot at us. When it was all over every sandbag in this picture was laying on the ground. Every member of the gun crew was wounded and I walked away from the gunfight without a scratch. I remember that each time one of his rounds would come into the area I would hide behind this tree stump. After the battle was over I walked around looking for that stump to kiss. I tripped over this 2" stub that wasn't over 3" tall. I don't know I thought I was covered but I sure felt safe. I was less than a month from going home at the time and should have stayed in the bunker. Just couldn't let that happen.

I returned home from Vietnam in Late January 1969 and started on the rest of my life. We lived in an 8X38' trailer and went back to school.

Thanks for coming along for the ride.