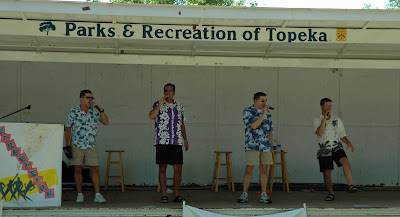 Topeka has a band shell that they drag around and have brown bag concerts during lunch downtown. It always draws a couple of hundred people or more. The group StreetSide was the music for yesterday. They started with songs from the 50's then moved on to the 60's and we left about the time they got to the 70's. It was lots of fun and as usual, we watched the kids and laughed as hard at them as at the singers. 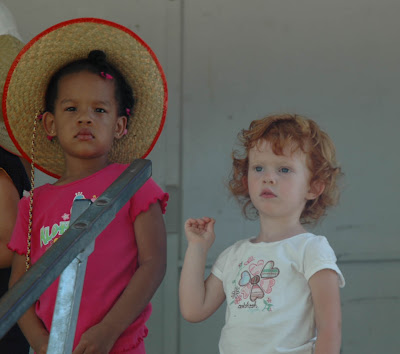 These two little girls were invited up on the stage with about 8 other kids and the red head just wanted face time. She is mighty purdy. The little girl in the pink shirt did smile except when Barb showed up with the camera. 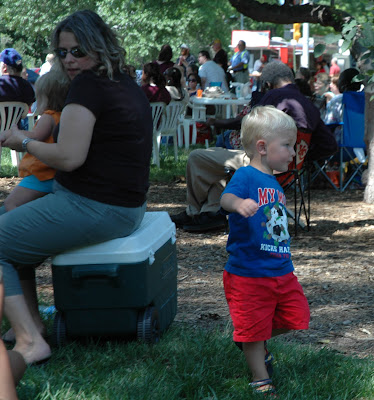 This little guy looks like the Petty clan and had about as much fun as his mother could stand. He had to be taken away for time outs twice. I worried that he and several other kids would have chiggers as much as they played in the grass. 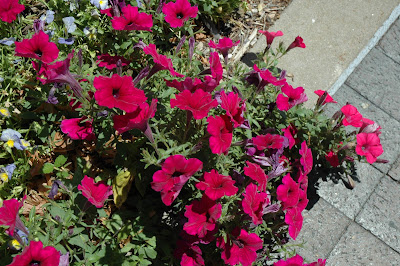 This is a typical corner flower garden here in Topeka on Kansas Avenue. We stopped at Wolfe's camera to replace the lens cap I left somewhere on our trip to Tulsa. I had my first and last poor meal at a Mexican Restaurant downtown. Their Monster Burrito was just not that good. They covered it with a gravy that tasted like it might have some cheese in it but would have been better over biscuits if you added a little sausage.

We then went over to Sam's Club and bought a new bed. One bed we had in our guest room was 40 years old and needed to be replaced. We put the new pillow top mattress in our room and our old mattress in the guest room. The 40 years old one went out to the trash this morning.

The Sunflower State Games start today with rowing at the lake. Wouldn't you know it looks like rain. Dang!