Middle Of No and Damn Where! 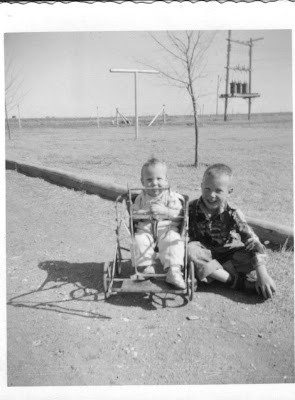 The kids in the Petty family today have Grandma Erma's House on Beaver Lake to visit. My sister Carol and her husband bought the property and have welcomed the family to go down to stay there. It has a great view, close to the lake and if you like to fish and swim it is a wonderful place to visit. Now that they have rural water and a new septic system it is pretty close to home. The reality is that once upon a time Erma and Curly lived in a part of Kansas that was far different .

I described it then as the middle of no where. Now I have it changed to the middle of "no and Damn where". If you go north out of Hoisington about 8 miles you run into a little town called Susank. Go about 2 miles west and two miles north from there and you run into a Shell Oil field with the superintendents house along the road. This picture is taken along the driveway of that house. It is my little brother Rick and I. He was about 1 and I would have been about 6.

Did you see the horizon in that picture? Flat and other than the curve of the earth there wasn't much to see out there. Now, the adults managed to have a lot of fun out there and on occasion I also had some fun. Mostly it was watching the drunks run into the ditch and try to get to their cars after a night of drinking and fun.

One constant was that about 100 feet south of the house was an oil well that had a John Deere one lung motor on it and it pumped about half of the day and night. For the edification of the younger group, that motor had a "Pumpety- Pump, Pumpety pump , pumpety pump" sound the entire time it ran. You either got imune to the sound or went crazy like some weird form of water torture.

Thanks for coming along on this little trip of nostalgia. It takes me back to the first 10 years of my life when one of the places we went on vacations was to Grandma's. Back in those days, there wasn't money to go to wild and different places like National Parks (unless you consider driving by Cheyenne Bottoms a treat).