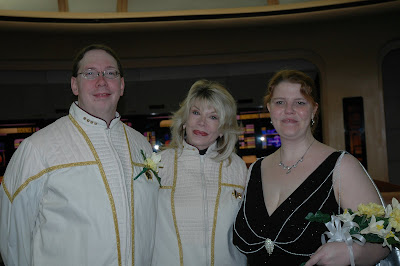 Our Son Dave and his wife Barb after renewing their Vows on the Command Deck of the Star Ship Enterprise at the Hilton in Las Vegas.

Barbara and I went to Las Vegas in 1968 and got married in the "Chapel of the Bells" right there on the strip. It wasn't a big church wedding but a formal commitment to each other witnessed by several members of the family. I'm sure followed by many coins tossed into the slots. We were all too broke to have a formal diner. I think we had dinner at Denny's.

Many people today are all worked up about the same sex marriages out there on the Left Coast. How can it be much different than the just more than a Civil Ceremony that we had. It isn't the name, it isn't how, it is why and what you do when you get it. Hell, 50% of the marriages today fail so it can't be all that darn good or worth protecting the name.

In fact, I think Nevada needs to find a way to change their laws and have Same Sex marriages in Vegas and Reno. Fer Christ sakes, they have legalized prostitution in their Capitol County. Think about it, the entertainment Capitol of the world and you have to go to Barstow to get Married?

No more fuss about this, I think it is now a done deal and we should move on to bigger things. Love the one you are with. I don't care who does what to who(m) in you bedroom.