Today, the Hot Rod Power Tour 2008 stopped at Forbes Field south of Topeka. They had driven in from Springfield, MO last night and Little Rock the day before. There were probably 200 cars with the tour and another 100 "day Trippers from the local area. 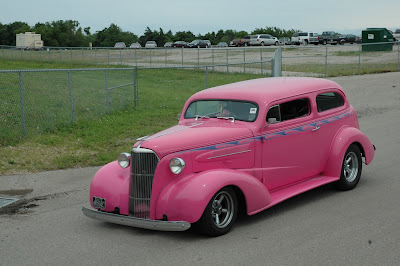 I love this car except for why would anyone paint it pink? 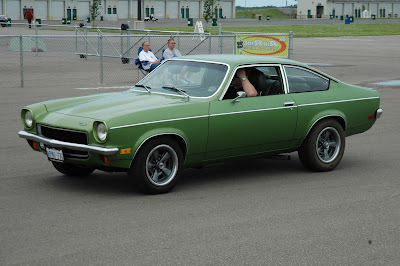 Is this one of the last street capable Vegas? It went by quiet and straight. No smoke and nothing fell off.

You should hear this little truck go by. It was as loud as it was cute. 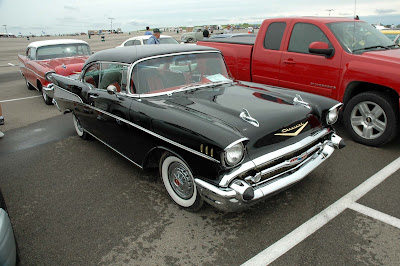 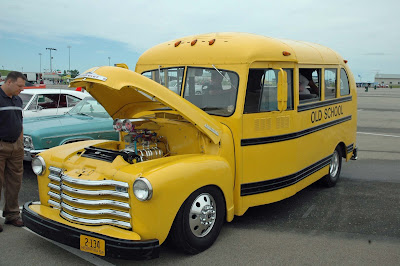 I took this picture because it reminded me of Kenny's bus when he came through Kansas. This bus has a 454 Chevy engine with a blower. The inside was pretty much done with a nice tan material.

One of the guys in the row of vehicles had an Edelbrock Carb on his engine and I said to him, "You are having trouble with your idle aren't you?" He said he damn sure was and it was driving him crazy. I noticed that the little rubber boot on his constant vacuum side was cracked and I had spent hours trying to figure out what was wrong with my truck. I showed him that the rubber was cracked and when it got hot it would expand and let air in. I was glad to help out a fellow rodder. Almost all of the people there loved to visit about their cars and I got to talk with a lot of them.

This was a fun day but a lot of walking from where I parked to where the cars were. Should have taken the bent with me.