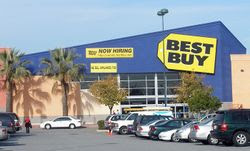 My son has gone to work for Best Buy and I'll bet within a year he is the most technological guy on the block. He told me that the difference is that the hook up so he can use his I-pod and charge it in the car is about $30. Retail it sells for $50 and he can buy it for about $20. I don't know if it was a return or not but that's a pretty good deal if you want technology. When he was over last Thursday, or for the past 13 weeks, Storm day, Dave was working on a new notebook computer. It was fast, pretty and hooked right into my wireless system. His old notebook had some bad cord between the main computer and the screen. Dave is just sure that he can't get a replacement hence his refund or incentive payment went into a new machine. Now if he can just complete that on-line course he is taking this summer...

A couple of weeks ago the Hot Rod Power tour came to Heartland park one day during their tour from Little Rock to Minneapolis. A couple of young kids were walking towards the cars when one's pocket began to make music. He reached in and pulled out a bunch of wires and a cigarette lighter sized device. By the time he got it attached to his ear and all hooked up , he said," dang, it went to voice mail and I'm almost over my minutes". He pushed a few buttons and then spent about 5 minutes trying to convince someone that he really was busy right now and could not come to the other location for at least an hour or two. I walked on, secure that while I was not able to call anywhere, I was also no able to be found. Retirement should be good for something. For most of my Adult Military life I was hooked to some kind of communication system and on call for all sorts of emergencies. Not any more.

Retirement should be kind of like fishing. You can sit somewhere and think about your dreams for the future and fantasies of the past without someone making music in your pocket. I don't care if I am the theme from Star Wars on my son's phone. He is a recorded message on my phone when I get home. Unless and until life changes significantly for me, I will remain cell "phone less". Get used to it boys and girls, this is one old guy that thinks blogging right here is about as connected as I need to be. So There!